Firstly I want to say thank you again to my hosts last night, Mitsuji and Sachiko. お世話になりました。
I had a good breakfast and an even better sleep and then took advantage of my first windless day. The road was busy but I stuck with it and chewed up the miles.
I crossed the big blue cantilever bridge on to Nagashima with the 12.40 ferry – still 18km away – in mind. About to whiz on I’m hollered at from a car park. ‘Oi’ is both English and Japanese. Mitsuji and his colleague are waiting to buy me lunch! My mind was still fixed on that ferry so I declined and took up the offer of an Aquarius instead.
When I rode on and hit my first hill I immediately regretted my decision. Who am I to turn down an offer of lunch!? Well, I could hardly go back.
The road into the tiny port was a steep downhill and I flew down with 2 minutes to spare. I rolled straight onto the ferry, ran back to buy a ticket and then jumped on board just before they lifted the bridge. Feeling like Indiana Jones with a sore bum I collapsed on a sofa and wished I stopped with Mitsuji for udon.

Amakusa is my favourite place so far. Route 26 that followed the inland sea coast like a piece of string was like riding through a Ghibli animation. Rice paddies and mountains to my left and the glass-like sea to my right. I took my time and soaked it in. You can get a feel for the ride from this video:

With daylight soon to fade I started looking for a place to camp. But, like I said, it was all rice paddies, mountains and sea – non of which will take a tent peg. I slammed on the brakes at the sight of grass. And a toilet block. Not quite paradise but not far off. I asked a couple of mechanics who were working nearby if I could camp there. They agreed, as long as I didn’t burn their grass. I must look like a fire starter.

Men have used pets as a starting point for wooing for centuries and I seized the opportunity when I was introduced to Jump, the resident dog. As I petted the young chap the lady of the house struck up conversation. She reminded me a lot of my Grandma and she seemed wary but excited at the sight if me.

わ
Later, after waking the dog together, chatting in a mix of Japanese and English, and eating mochi and dried fish we began comparing photos. I showed her my home(s) in England and a picture of my girlfriend. She showed me a dozen albums of her husband catching, killing and butchering wild boar (or crazy pig, as she called it). I wondered if I would sleep well tonight after all.
Again, I feel really lucky to have met interesting and interested people who are willing to let me into their homes with little or no notice and share their food and their lives with me.
お世話になりました。 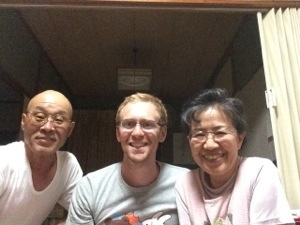