Yesterday’s post focused on the terribleness of post tsunami Tohoku. What I didn’t share with you was the fantastically wonderful, yet typical of this trip, way in which I found a bed for the night.
As rain clouds threatened to bring an early close to the daylight hours I scoured the villages inland for a minshuku, or Japanese hostel. I’d decided that if I was going to pay for accommodation then it would be in this area, so desperate for tourism and tourist money.
With no luck I pulled in at a rural service station, which basically has a toilet and a shop selling fresh local veg and dried squid snacks.
‘Excuse me, u don’t suppose you know of any minshuku around here, or somewhere cheap I can stay?’
This kicked off a series of events: a fellow worker was called, then another, and another until four middle aged women in green aprons and matching headscarves were discussing the most likely options for a bed for the night.
‘The only place we can think of is a ryokan (slightly pricier than a minshuku) a few kilometers back where you came from.’
I said it sounded promising and asked how to get there.
‘Wait! We better check they have space. I’ll call.’
Then stage 2 began. The women called the ryokan. They were full. But know with phone in hand they were empowered. Between them, and with the added help if new arrival Mr. Murakami, they started calling people. I’d completely lost track of the situation. All I knew now was that the entire staff was working towards finding me a place to stay.
Then Mr. Murakami began waving his hand and speaking louder. As he ended his call the women applauded and cheered. He had found me a bed.
I was woken at 7.30 by Takeshi Ishikawa. I staggered to the living room with sleep in my eyes where a wonderful breakfast awaited me.

I ate up, packed away my futon and gathered my things.
‘Your lunch,’ said Yuko Ishikawa as she handed me a bag.
Four onigiri, rice balls wrapped in seaweed, and three cans of juice.
I bowed and tried to convey my thanks as sincerely as I could. The neighbours came for a photo before I left and on my way back I called at the service station for a picture if my own with the team that saved me. These people, remember, lost their entire town and no doubt some friends to the tsunami and they showed me the greatest hospitality imaginable.
助かりました。ありがとうございました。 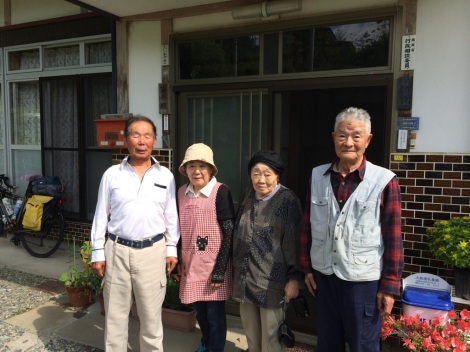 One response to “Day 40: Rikuzentakata, Iwate to Hanamaki, Iwate”